What are the social, political, and psychological factors that motivate and explain the social and political attitudes of young people in Israel’s periphery, compared with young people from the center of the country? Why are they less involved socially and politically and how can this reality be changed? To understand these and other questions in depth, aChord Center has conducted extensive research for the Gandyr Foundation and the Steinhardt Family Foundation in Israel. In October 2016, an online survey was conducted among a representative sample of young people in the periphery and the center of the country (1,419 respondents).

In addition, they attach greater importance to the preservation of Jewish traditions and the Jewish character of Israel, have less intention to vote in elections, and are less open to new information.

Unsurprisingly, the samples differed in all demographic variables, particularly those related to economic welfare, and their exposure to violence. In addition, differences were found in various psychological variables, where young people in the periphery are more likely to justify the system even though they identify as members of a disadvantaged group, are more frustrated by their relative status, and angrier at the gaps in Israeli society.

An analysis of the findings reveals several variables that may serve as a means of encouraging constructive attitudes, openness and civil and political involvement among young people from the periphery including anger and shame at the social gaps, shame at Israel’s attitude towards Palestinians, independent and group efficacy, and hope for the future of the society and a solution of the conflict. Use of the research findings can serve as a basis for developing more effective socio-educational interventions to promote these goals. 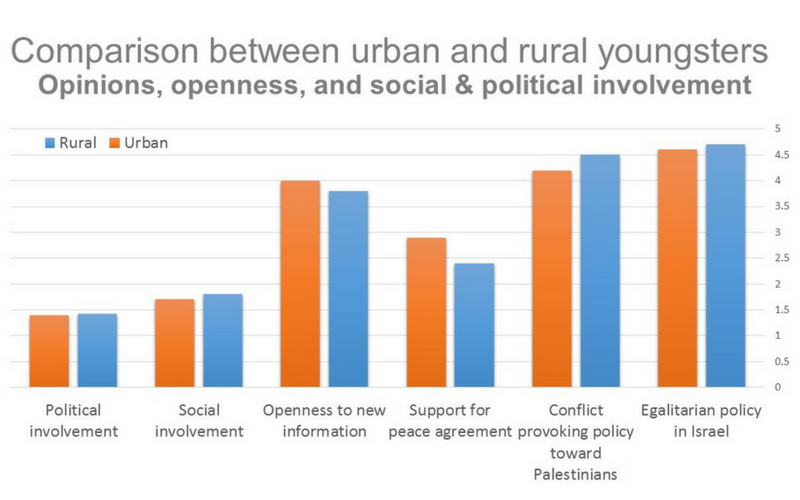