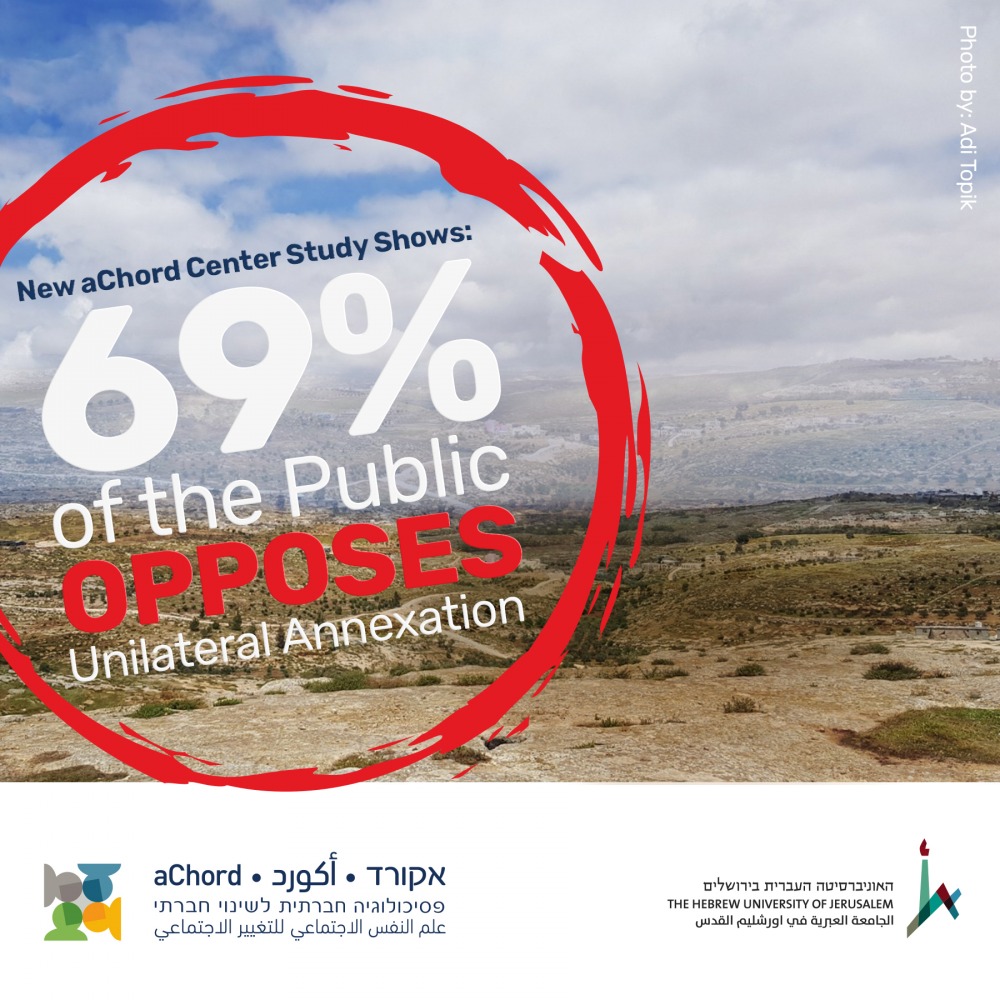 A comprehensive survey, conducted by the aChord Center - Social Psychology for Social Change at the Hebrew University of Jerusalem, examined patterns of support and opposition regarding the government’s annexation plan, which is scheduled for this summer. This study, which is the largest and most in-depth study conducted in the country on the topic of annexation, found that:

The survey was conducted in early June 2020 among the adult population in Israel. The survey sampled 1,795 Jewish citizens and 182 Arab citizens - a total of 1,977 respondents.

A significant majority of the Israeli public opposes the government’s unilateral annexation plan.

It was found that majority of Israeli citizens oppose the annexation plan. When the respondents were asked to decide between support and opposition regarding unilateral annexation, it was found that 69% of the public oppose unilateral annexation, while only approximately 31% supported it. This represents 63.5% of the Jewish population and 92% of the Arab population who oppose annexation. In addition, taking into account the division of political camps in the Jewish population, the study found that the opposition of the Left and the Center is almost at the level of consensus (94% and 80%, respectively), whereas 40% of the Right stated that they oppose this political move. The question that was asked was “What is your level of support or opposition regarding Israel unilaterally annexing areas of the West Bank?”, with the answers ranging from 1 strongly opposed to 6 strongly support.

Opposition and support for unilateral annexation among the general public - 69% opposition, 31% support: 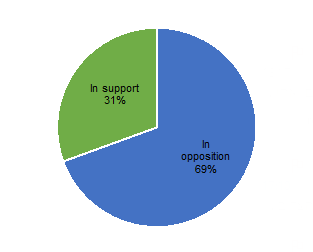 High percentages of opposition to unilateral annexation among Jews:

In the Arab population, 92% of citizens oppose unilateral annexation: 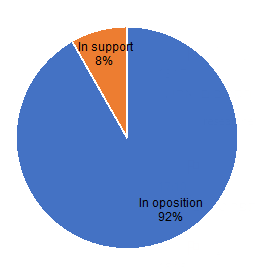 A total of 63.5% of the Jewish population, 92% of the Arab population and 69% of the general public in Israel oppose unilateral annexation.

The Jewish population perceives support for unilateral annexation as higher than the true level of support: 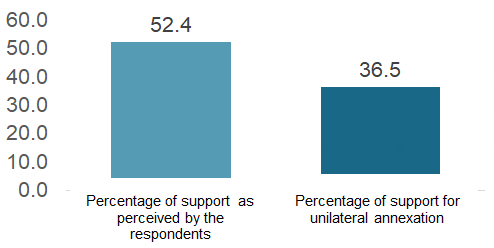 The study also examined the public’s priorities regarding various issues that are on the agenda. The participants were asked “The following is a list of social and topical issues. Rank the issues in order of importance with which they should be addressed from the most important (1) to the least important (8) to you”, and were presented with the eight issues appearing in the graphs below. The findings show that unilateral annexation / applying sovereignty is the lowest ranked issue on the public’s list of priorities, while the issues that are at the other end of the scale include the cost of living and the state of the health care system.

Annexation of the West Bank is ranked as the public’s lowest priority:

Majority of the public feels that the government’s priorities do not align with their own:

In conclusion, the study’s findings indicate that the majority of the Israeli public opposes the unilateral annexation plan and believes that it does not reflect its priorities. In addition, there are gaps between the low level of support for annexation and the estimated level of support among the Jewish population.

Prof. Eran Halperin, Founder and Co-chair of the aChord Center: “We have conducted an extensive study with a particularly large sample, and the findings are clear and unequivocal - the majority of the Israeli public opposes annexation and regards it as an issue at the bottom of their list of priorities.” Director of Research at aChord, Dr. Yossi Hasson: “While there seems to be a political debate surrounding unilateral annexation within the government, it is not sharply reflected in the general public’s positions. Compared to other political issues, the survey’s findings show that there is a relatively broad consensus surrounding the opposition to annexation.” Lee Aldar: “The study clearly demonstrates the gap between the public’s true positions against unilateral annexation versus what is perceived as public support for the move.”

The study data was collected by the survey companies i-Panel and Statnet Research Institute.